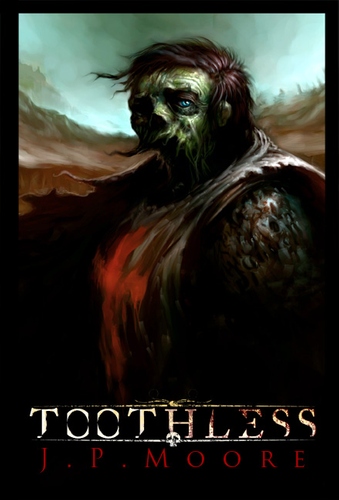 "Despite the title, this gritty supernatural historical has plenty of bite. Compelling and well told...this is an unusual mapping of familiar fantasy territory. [...] Toothless himself is an introspective, complex protagonist, and his quest to recover what he can of his past is by turns moving, intriguing, and highly entertaining." —Publishers Weekly

"Powerfully written, TOOTHLESS plunges the reader into the heart of a gripping, sometimes brutal, wonderful tale of what it truly means to be alive. Not to be missed!" —Ed Greenwood, creator of the Forgotten Realms® fantasy world and bestselling author of ELMINSTER MUST DIE!

"Toothless is compelling, intriguing and above all, utterly original. At last, something new!" —Peadar Ó Guilín, author of THE INFERIOR

An ancient evil leads a rampaging army of demons and undead warriors
across the countryside. Martin, a failed Templar, is slain on the
field of battle only to be reanimated in service to the very evil he
hoped to destroy. The Black Yew, the dark force that controls the
undead army, considers him a gifted minion...but he is also the last
hope of the living.

Life is not done with him yet.

Toothless arrives November 1, 2010. (Even though the link says "In stock," books will ship in November, 2010.) Preorder your copy now!